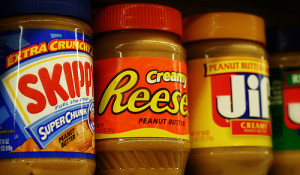 “It’s Peanut Butter for God’s Sake!” In the middle of Wal Mart, I just wanted to scream. Sometimes I am amazed at how much energy, life, attention is ABSOLUTELY WASTED when people hold their breath, make fuzzy movies, and AGONIZE over SIMPLE DECISIONS.

POWERPOINT: Every wealthy person I have met, modelled, or Mind Hacked MAKES UP THEIR MIND QUICKLY. They don’t RUSH IN, but they ARE DECISIVE. In other words, they don’t treat their lives like a major world crises centered around which jar of peanut butter….

Let’s face it, Joe Sixpack is addicted to agonizing over decisions. Don’t be Joe Sixpack.

And let’s get this bit of STINKIN THINKIN ONCE AND FOREVER:

It’s not the Government or the Conspiracy or the Politicians keeping him dumb and broke – it’s the fact that he either doesn’t know how to make a decision – be decisive – on what matters most – or he never learned HOW TO MAKE A DECISION OR RUN HIS MIND.

For your own sake… Notice: In the past week, what have you accomplished? Where have you stretched? What are you excited about? What is energizing you? I WANT TO KNOW. Leave a comment below.

Yesterday I wrote about how my writing and productivity is way AMPED UP with Srivener. All because I took FOUR MINUTES TO SPEED SLICE – to determine if it was worth it to invest 2 days of my life mastering a new tool.

I am loving it so much, my GF… well let’s say she’s heard TONS about it. I’ve also in the past week really EXPLODED PAST some old COMFORT ZONES – and once you get how those limit your income – happiness – health….

And I showed a way to make DECISIONS LIKE LIGHTNING….

Your turn. Leave a comment. Read up. Take action.

Time to Rock and Roll!

PS: This is where I share Apache Scout Mind Control 2012 = Click here. Obviously, I like it, I like it a lot. Because it’s simple, straightforward, and… Go watch the vids. Get it if it makes sense. Whooo yah!

Mr Twenty Twenty is that guy who legally changed his name to the number of "Perfect Vision". He lives his life, focused on helping people develop the inner resources they need to live their personal visions, while discovering who and what we "really are". If you enjoy his writing, let him know by emailing him at 2020@exhostage.com.

View all of Twenty Twenty's posts.